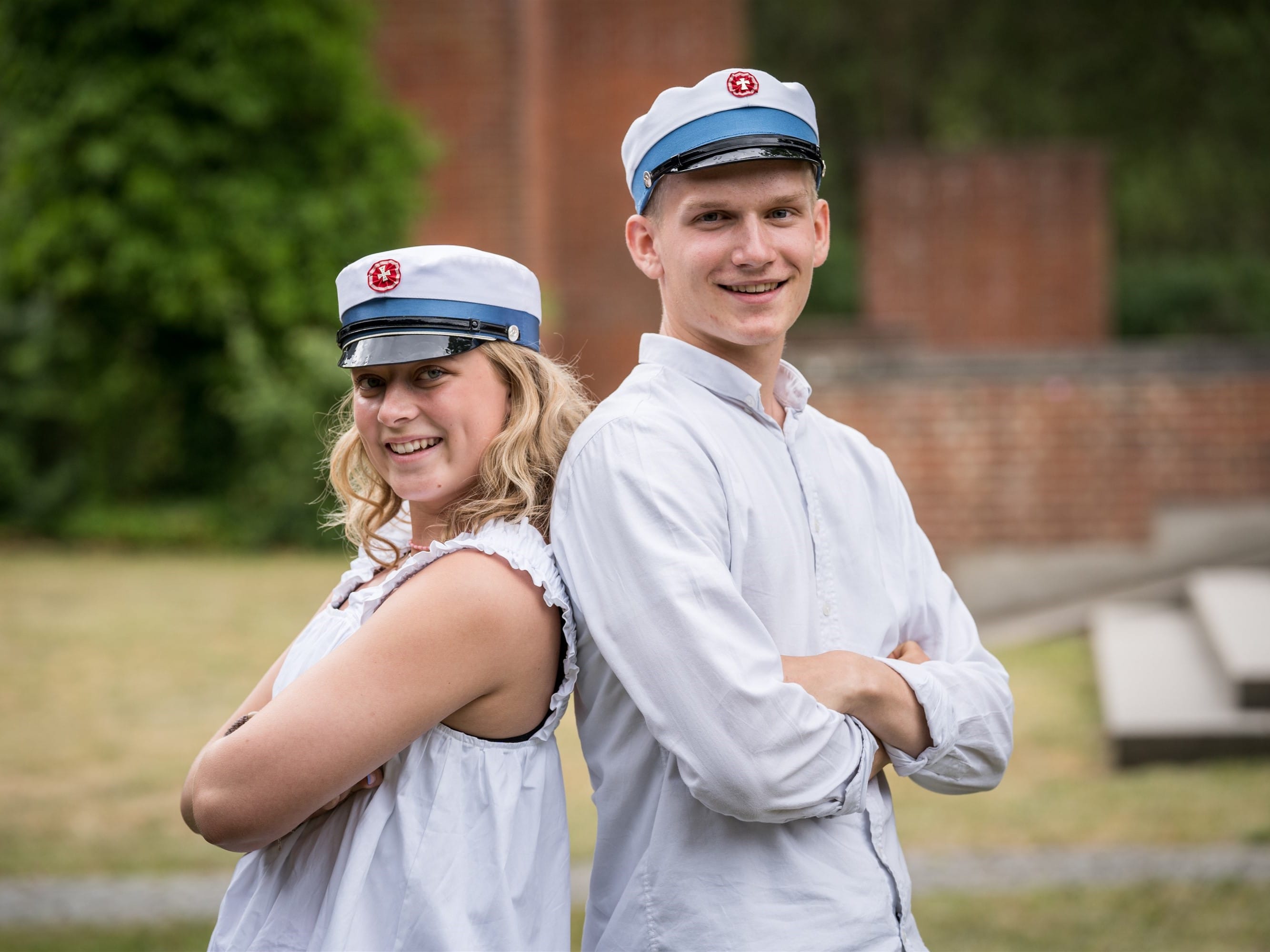 When School Becomes Your Favorite Place to Be

In these weeks, end of June and beginning of July, it escapes no one that upper-secondary graduates are celebrating. Colourfully decorated trucks with partying teenagers on their way from one party to the next, and loud music that carry on and on until perhaps someone in the neighbourhood runs out of patience.
What then still stands when the last party is over, apart from the not at all unimportant diploma? Two of this year’s HF graduates look back.

HF has been so much better than I expected, says Sophie Berg Bakmand. Before my time here, I found school difficult. At that time I didn’t know that I am dyslexic. It was diagnosed here and so I could receive technical aids.
Sophie continues: I chose HF because I was scared the academic level at STX and the work load would be to much for me. HF is only two years. So I could get away again quickly, I reasoned back then. But now I would have no problem at all doing a third year.

Her classmate, Morten Fredenslund Møller, agrees. I actually considered dropping out in order to be able to stay another year, he says with a twinkle. For me school used to be something I had to do. Now it is something I want to do and that I enjoy. During the study leave I’d rather have been at school, because that is were my friends are.

Diversity helps you to mature

Neither Morten nor Sophie are of course going to spend another year at Grenaa Gymnasium. They are moving on. So what do they carry with them?

Morten: I’ve discovered .. well, hard work. To do one’s best. The teachers aren’t primarily interested in what grades you end up achieving. But they do want to see you work to become as good as you can.

He continues: I also learned that differences of age don’t mean anything. There was a 24 years old guy in one of my classes. The age difference between him and our teacher was less than it is between him and me, but still the two of us had a lot of good chats. So when I start at teachers college next year, it will not surprise me or unsettle me in any way that some of my fellow students might be 25 or 26 years of age.

Sophie likewise feels that she has benefitted from the diversity. At my previous schools everybody were much like me with the same type of upbringing and family background. There weren’t any with a different cultural background either, she explains, and continues: HF has also boosted my self-confidence. I know myself now. Initially, I was full of doubts like ‘who are my friends and who do I fit in with’? I now know what I am looking for in a friend.

Sophie also experienced that her academic level increased. In one of the subjects I used just about pass earlier. Here I achieved the top grade in that same subject. It is amazing that it is possible to become so much better, she says.

Before HF for me school was much about friends and fun. Here I developed self-discipline. My disposition to achieving has been called to the foreground.

Even if self-discipline is a major force, Sophie sees her classmates as the decisive factor in making her two years at Grenaa Gymnasium a good experience. Without them I wouldn’t have made it. The teachers help you, of course they do, but classmates are often able to explain things at the exact level you are at and understand what it is the problem is. They have really helped and supported me.

There is no reason to think that HF is not for you if you’re ambitious, Morten concludes. The teachers see quite clearly who want’s to work. So, if you have ambitions, only not for the university, or at least not yet, HF might be a good choice for you.