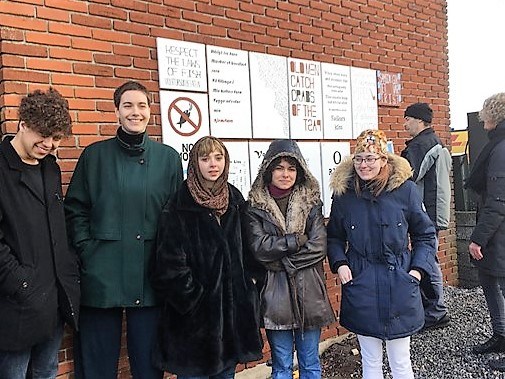 Poetry at the Harbor – Harbor Poetry

March 21 was UNESCO’s World Poetry Day and this year students at Grenaa Gymnasium celebrated it with poems of their own at Grenaa Harbor. The poems were not only read aloud but also attached to an outdoor wall for everyone to come and see. Poet Ian Lukins also read some of his poems at the event.

Talent Coordinator Rikke Gade Johansen explains that the students attend the Creative Writing course at Grenaa Gymnasium and that the poems are all filled with harbor atmosphere. “We work with an expanded concept of literature where literature can appear in unusual contexts, for example on walls, lamp posts, sidewalks and on internet sites. So don’t be surprised suddenly to encounter poetry during a walk in the park or at the harbor,” she says.

Rikke Gade Johansen informs us that the students will have more unexpected poems in unususal contexts ready later this year at the big Water Festival in Grenaa on June 10. 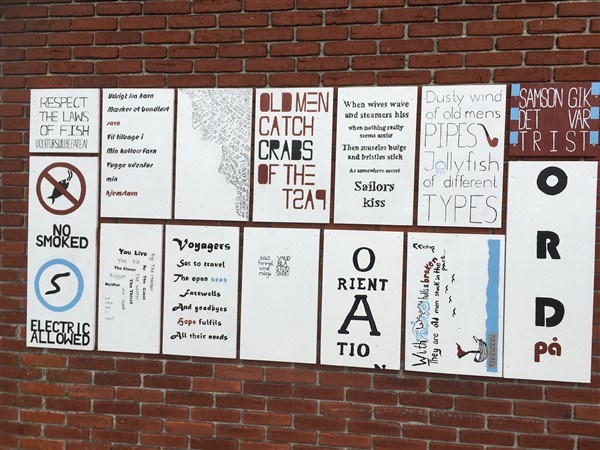 Practical help and local good will

Visual Arts teacher, Merete Christensen, helped the students to produce poetry boards to be attached to one of the out door walls at the harbor. “Our very dedicated and persevering school caretaker assistant helped us attach them during rain and hail,” she says and also offers her thanks to Malerfirmaet Tipsmark, a local painting business that sponsored materials for the boards. “They were very cooperative and helpful towards us and understood the visual ideas of the project.”

The Poetry at the Harbor project is launching the new Writing School in Grenaa that will open its doors to young people between 16 and 20 years of age from October. The Writing School is a partnership between Grenaa Gymnasium, the library departments in the municipality of Norddjurs, Grenaa Harbour and the Water Festival.

The project is part of Rethink Norddjurs 2017