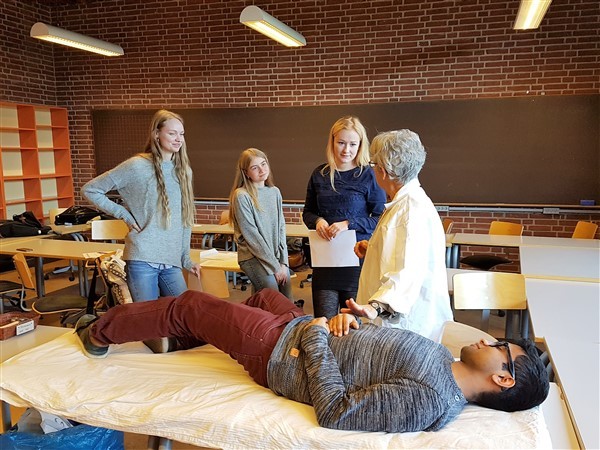 It is year 2025. The Danish welfare state has collapsed and a civil war has broken out. You have to flee to a country where you are not fluent in the language. This day begins in a dark assembly hall…

On 22 February there was a Language Event at Grenaa Gymnasium. All 2nd year STX-students of German, French and Spanish as their second foreign language, as well as IB1 Spanish B and 2nd HF Spanish were assigned the roles of refugees that had to cross a border, have a family member hospitalized, fill out an application for asylum and report to their families. Also the teachers had roles. For example as a border guard or a doctor.

“This day was tremendously instructive and such a great way to learn language. You were forced to speak Spanish and make yourself understood in specific situations.” Benjamin H. 2.kb

A School Day that turned out differently than expected 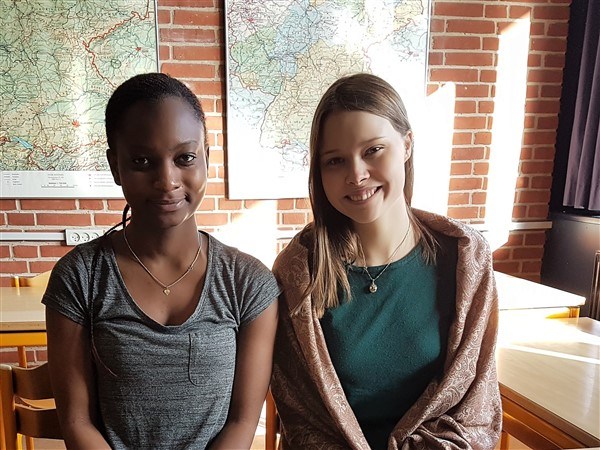 Emma Maria Katballe, 2sw German and Ninette Irambona, 2.stx French played their roles as refugees at the event. “I was expecting that a language event would be a lot about grammar and grammar exercises, but I was very mistaken!” Emma explains. “We entered the assembly hall and were surprised how easy it was to slip into the role. That was awesome! The teachers had really put an effort into it and planned it so that it turned out to be interesting and fun.”
“I too had feared that it would be a bit boring,” Ninette adds. “But when the headlights hit you, you were put in a new role. The beginning of it all was very important to enter the role.”
Emma agrees: “It was great that both teachers and students had new roles and had to identify themselves with refugees. Or refugees fleeing the second time,” she says and looks at Ninette. “It was actually the second time I had to flee since I was an infant, but it was not a disturbing experience to me and I enjoyed the Language Event.”

“It was a fun and different way of practicing language. The usual lessons are not at all bad, but this was a really good initiative and I wouldn’t mind at all if they’d do something like this again.” Adam, 2.kb

Commanding more of a language than expected 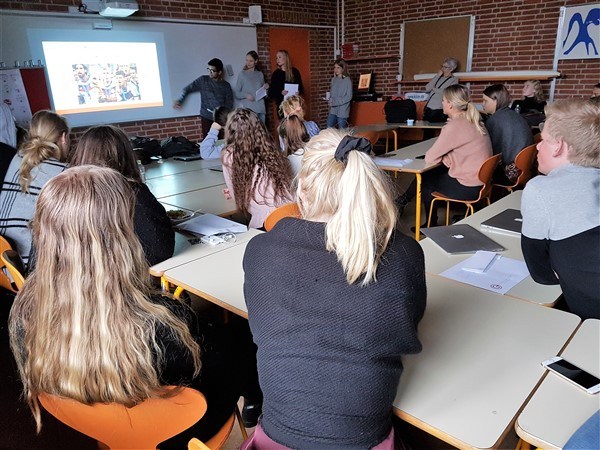 Although the students did not know what was planned for them, they were not totally unprepared. They had been given a glossary and it turned out to be useful. “The glossary was a good idea. How else would you know the French term for appendicitis,” Ninette says. “But I also think that a common experience was that one’s vocabulary is bigger than one was aware of.”
Emma thinks that the Language Event will have a positive impact on the language lessons. “You learned something that you can bring with you into the lessons. You were forced to speak the language all the time and I’ve experienced now that you don’t have to be afraid to ask about something in a foreign language.”
Apart from having their command of foreign language tested in practice, they also worked together with students from other classes than their own. “I felt that everybody were included. Everybody would contribute in their way to solve the tasks and came with ideas,” Ninette explains about the production of videos and other informational materials that had to be made during the day.

“It was very inspiring to meet so many enthousiastic students and teachers.” Alexander, 2.u

The videos below are examples of how the students chose to solve their presentation assignments.