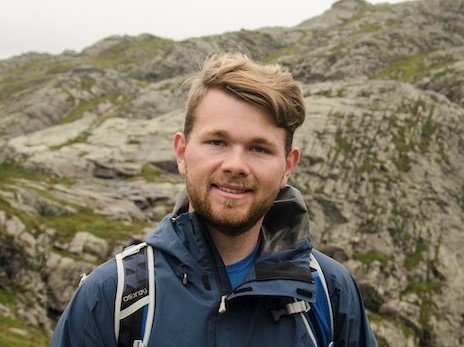 Thomas Kruse Andersen is keen on natural sciences. Earlier this year he graduated from VIA University College and is now a science teacher.

Thomas Kruse Andersen finished his teacher education this summer with a bachelor project for which he has now been awarded a special prize. It is the education colleges in Denmark and the teachers’ professional magazine that award the prize each year. Apart from the honour attached to the prize, it comes with an amount of Dkr 10.000,- and some other gifts.

“My bachelor project was about models an modelling in biology. I examined what modelling competency is, how the use of models have changed in teaching biology since 1958 and I examined the thinking of two biology teachers on models and modelling,” Thomas explains.

The route to the education college went through the Far East

As many young people in Denmark do, he decided to have a gap year. During that year he enrolled at Silkeborg Højskole, an adult boarding school, and he went on a longer trip to the Far East. When he returned, he decided not to become an engineer after all.
“I realized that I did not want a job where I would have to work on my own much of the time and also have to do a lot of paperwork. I was still passionate about natural sciences, so I decided to become a teacher. This gives me lots of contact with other people and at the same time I get to work with sciences,“ Thomas explains.

Thomas finds that especially the math and physics lessons at Grenaa Gymnasium together with the specialized study project in his final year strengthened his persistency and thus ability to do in-depth studies. “Sometimes you have to re-read, do the calculation or start all over again. To reach a good result requires effort. I remembered that when I did my bachelor project and I did not settle for less than a full understanding of my problem.”

“At Grenaa Gymnasium I also learned a variety of approaches and skills, and I now realise how I am benefitting from this the way that I feel confident and resourceful when I teach. In addition to this my former teachers at Grenaa Gymnasium have been very helpful also after I graduated,” Thomas says. Among other things they have shared teaching materials with him that he now looks forwar to trying out himself with his students.

Apart from the curricular knowledge and study skills that he acquired at Grenaa Gymnasium, Thomas also stresses the many good memories he shares with his former class mates. “I think, I learned not to be afraid to try new things and meet new people. One of the things I remember well, is the exchange trip to Kenya and the experience of hosting Kenyans myself. As the opportunity for exchanges came along at the teaching college, I went to Greenland and also Norway.”

Learning to teach is like learning how to drive a car

Thomas is now in his first job as a teacher at a school near Aarhus. “My experience so far is that there is a pretty long stretch from the theoretical knowledge on acquires at the education college and the realities I face on a daily basis now, “ says Thomas and mentions the time pressure and the great variety of tasks he has to perform as some of the surprises. “I guess it is like learning how to drive. It is after you have passed the driving test that you start learning how to drive a car.”